The Mandalorian: Who Are Those Imperial Troopers?

The Mandalorian is bringing a major plot point from an iconic Star Wars video game into official canon. Here's what you need to know about the Dark Troopers. 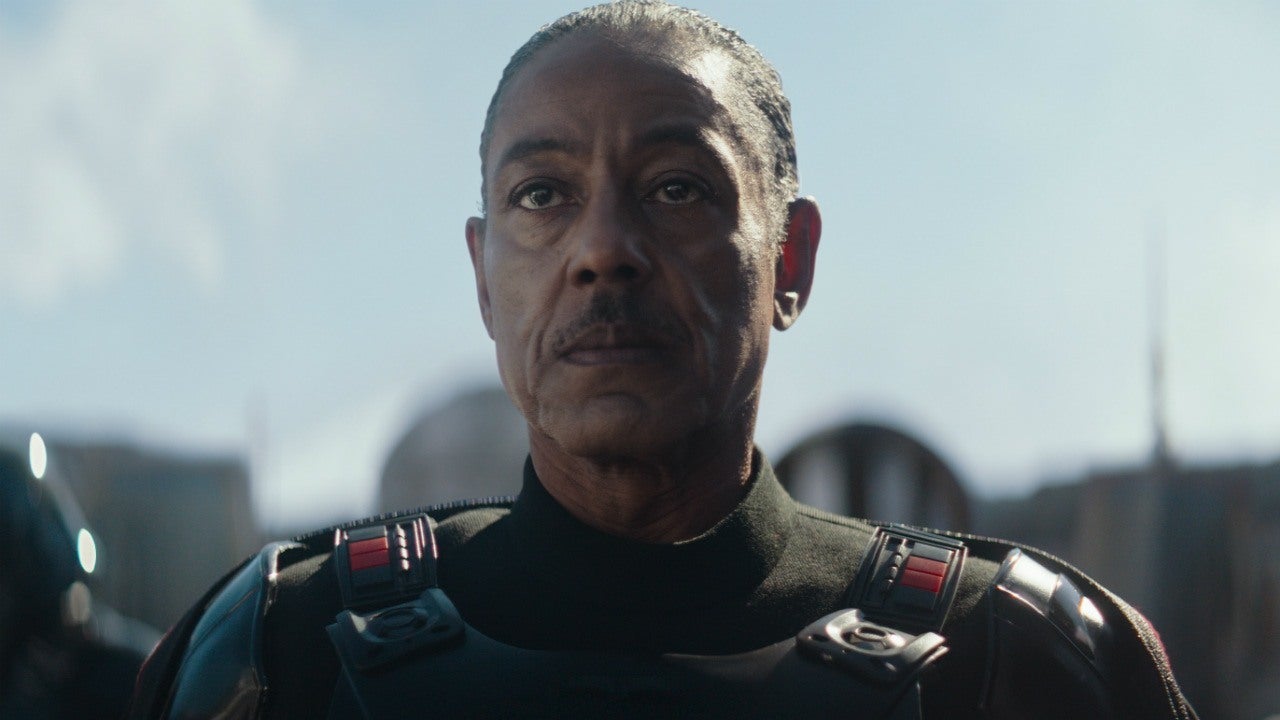 Warning: This article contains spoilers for The Mandalorian: Season 2, Episode 4! [poilib element="accentDivider"] The Mandalorian: Chapter 12 proved to be a surprisingly eventful episode on multiple fronts, not least of which being the first in-canon appearance of a major Star Wars video game villain. The Dark Trooper looks to now be an official part of Disney's Star Wars timeline, and that means Mando and friends have a very dangerous new enemy to contend with. If you weren't a PC Gamer back in the mid-'90s, you may not recognize these ominous armored troopers. Read on for a full breakdown of what the Dark Trooper is and how their live-action debut will impact the plot of The Mandalorian. [caption id="attachment_2441923" align="aligncenter" width="1343"] 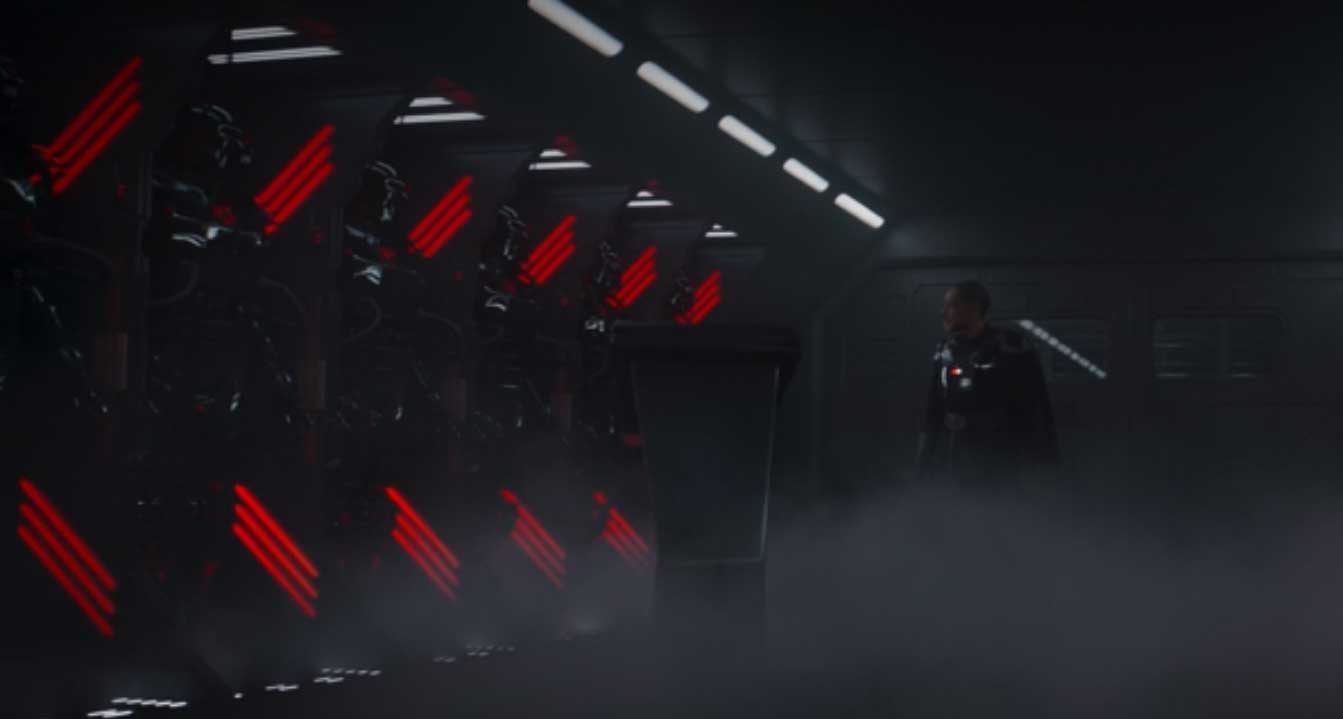 The Dark Troopers as seen in The Mandalorian: Chapter 12.[/caption]

The Dark Trooper was first introduced to the franchise in the 1994 PC game Star Wars: Dark Forces. Dark Forces revolves around Kyle Katarn, an ex-Stormtrooper and mercenary who is hired by Mon Mothma to steal the plans for the first Death Star (obviously, the game is no longer part of the official canon). That initial mission only forms the basis of the game's opening level, however. From there, the game pivots to a series of missions involving Kyle and his partner Jan Ors investigating the top-secret Dark Trooper Project. As the game reveals, the Dark Trooper Project is the brainchild of General Rom Mohc, an Imperial notable for his obsession with one-on-one combat and his distaste for impersonal super-weapons like the Death Star. The Dark Trooper is designed to be a much more powerful alternative to Palpatine's ordinary Stormtroopers. Dark Troopers are outfitted with stronger weaponry, jetpacks and nearly indestructible armor forged from the rare metal phrik. [ignvideo url="https://www.ign.com/videos/2015/11/29/before-star-wars-battlefront-there-was-dark-forces-up-at-noon"] Dark Forces introduces three variations of the Dark Trooper. Most Dark Troopers seen in the game are actually battle droids rather than living soldiers. The Phase 1 Dark Trooper resembles nothing if not a cross between a Stormtrooper and a Terminator endoskeleton. The Phase 2 Dark Trooper is much larger and more heavily armored. The Phase 3 Dark Trooper is the culmination of Mohc's plans. It's an exoskeleton suit rather than an autonomous robot, and Mohc himself wears the sole Phase 3 suit in existence when he battles Katarn in the climax of the game. Naturally, Mohc is defeated, and the Phase 3 suit is destroyed along with the majority of the Dark Trooper Project aboard Mohc's Star Destroyer. [poilib element="quoteBox" parameters="excerpt=The%20Dark%20Trooper%20is%20designed%20to%20be%20a%20much%20more%20powerful%20alternative%20to%20Palpatine's%20ordinary%20Stormtroopers."]

Other Versions of the Dark Trooper

The Dark Trooper has made a handful of appearances in other Star Wars projects, mainly various video games and tabletop RPGs. For example, the MMORPG Star Wars Galaxies introduces the Triumphant-class Dark Trooper as a companion to Darth Vader, and the older Star Wars: Battlefront series throws Elite Dark Troopers into the mix. [caption id="attachment_2441867" align="aligncenter" width="1264"] 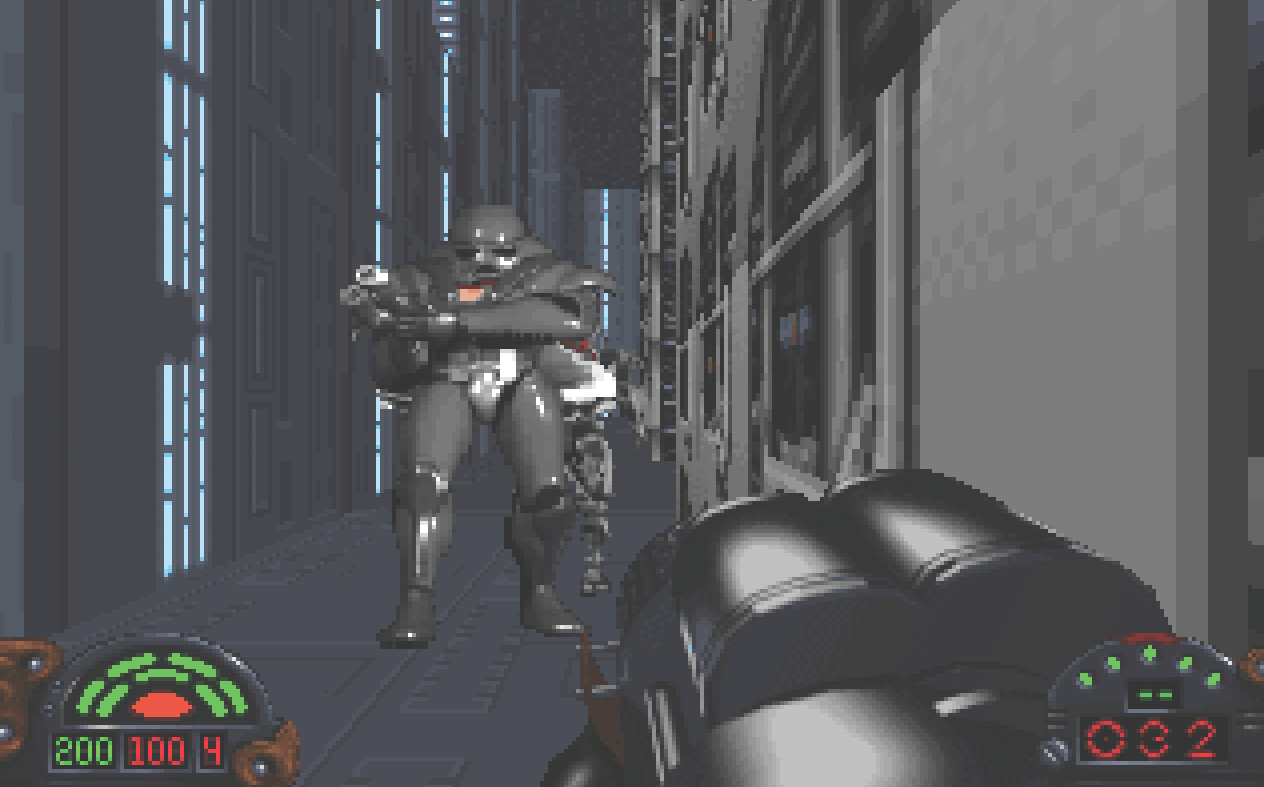 Kyle Katarn battling a Phase 2 Dark Trooper in Star Wars: Dark Forces.[/caption] Those early Battlefront games also fleshed out the origins of the Dark Trooper Project with the introduction of the Phase Zero Dark Trooper. These proto-Dark Troopers were designed by a younger Lieutenant Mohc using aging Clonetroopers as a template. Tapping into the same technology powering Darth Vader, Mohc augmented these Clone Wars veterans with extensive cybernetic upgrades. Unfortunately, the psychological toll proved to be too much for these Dark Troopers, and so the project pivoted to droids and exo-suits instead. Some of the early Dark Horse-era Star Wars comics like Dark Empire II and Empire's End feature a completely different version of the Dark Trooper. These elite soldiers wear black armor (not unlike the Deathtroopers introduced in Rogue One) and actually have limited Force abilities. These Dark Troopers are one of many weapons the cloned Emperor Palpatine unleashes on the galaxy following his return. Why the discrepancy? As writer Tom Veitch previously explained to IGN, the creators involved in the various Expanded Universe projects weren't always in close contact with one another back in those days. [ignvideo url="https://www.ign.com/videos/2020/11/14/the-mandalorian-season-2-the-latest-huge-cameo-has-a-hidden-meaning-canon-fodder"]

How The Mandalorian Could Reinvent the Dark Trooper

While those definitely look to be Phase 2 or 3 Dark Troopers in the final scene of The Mandalorian: Chapter 12, it's pretty much a given the series won't be following the Expanded Universe's example when it comes to these characters. For one thing, the majority of Dark Forces takes place shortly after the events of Episode IV, whereas The Mandalorian is set five years after Return of the Jedi. According to the EU, the Dark Trooper Project should be long gone by now. But as with a great many characters and elements that originated in the EU (Grand Admiral Thrawn, Darth Maul's return, etc.), we can probably expect The Mandalorian to draw some inspiration from these classic stories while also putting a fresh spin on things. We may learn Moff Gideon, not General Mohc, is the mastermind behind the Dark Trooper Project. The Dark Troopers could be portrayed as a last-ditch effort by the Empire to maintain power. No longer blessed with the limitless resources of the Palpatine era, the Imperial Remnant may now see the value in a smaller army comprised of highly capable, nigh-indestructible super-soldiers. The Dark Troopers may actually become the dark inverse of the Mandalorians themselves. Perhaps Gideon has stolen the secrets of Beskar armor and other Mandalorian arts in order to create a new breed of trooper. To date, Mando has gotten by largely on the strength of his blaster-proof armor and years of training. What happens when the enemy suddenly has those same assets? [widget path="global/article/imagegallery" parameters="albumSlug=the-mandalorian-season-2&captions=true"] It's also possible the series could draw on the variations of the Dark Troopers introduced after Dark Forces. Perhaps the series will revive the concept of Phase Zero Dark Troopers, revealing these soldiers to be cybernetically powered Clonetroopers left over from the Clone Wars. Hey, Temuera Morrison is already playing Boba Fett, so why not let him play a few clone characters while he's at it? We could also see the series unifying the conflicting versions of Dark Troopers seen in Dark Forces and Dark Empire II. Maybe these heavily armored super-soldiers will also be Force users. As Chapter 12 makes clear, Gideon is hellbent on mastering the secret of creating Force-sensitive clones and, apparently, helping usher in Palpatine's return. These Dark Troopers could represent his early, flawed experiments with midi-chlorians.

With Dark Troopers joining the fray in Chapter 12, a lot of Star Wars fans are probably wondering if Kyle Katarn might be next. Is there room for this ex-Stromtrooper-turned-Rebel spy-turned-Jedi Knight? It's certainly not impossible. Again, the series would have to tinker with the formula established in the EU. Given the events of Rogue One, we know Kyle didn't have a hand in stealing the Death Star plans. But fortunately, that adventure is just one stop in a much longer journey for Mr. Katarn. Even destroying Project Dark Trooper is just the beginning. The sequel Jedi Knight: Dark Forces II deals with Kyle's discovery of his Jedi heritage, a thread that continues across several games. Kyle winds up playing a heavy role in the post-Return of the Jedi EU era, including becoming one of the students at Luke Skywalker's Jedi Academy. [ignvideo url="https://www.ign.com/videos/2016/12/15/star-wars-why-kyle-katarn-is-way-cooler-than-dash-rendar-ign-plays-live"] Obviously, a series like The Mandalorian isn't going to have room to fully explore that character arc, but we could easily see the character debuting in Season 3 as a prelude to a larger role elsewhere. Kyle could start out much as he did in the original Dark Forces - helping Mando end the threat of Moff Gideon's Dark Troopers. From there, Kyle could link up with characters like Luke or Ahsoka and grapple with his Jedi powers. Even 26 years after his debut, Kyle Katarn still has a large fan following. Why not tap into that following by bringing yet another familiar Star Wars face into The Mandalorian? For more on the series, check out IGN's review of The Mandalorian: Season 2, Episode 4, refresh your memory on every character who's appeared so far and learn more about the rules of Beskar armor. [poilib element="accentDivider"] Jesse is a mild-mannered staff writer for IGN. Allow him to lend a machete to your intellectual thicket by following @jschedeen on Twitter.
Read More

Assassin's Creed Valhalla: How to Defeat the First Daughter...

Play Doom On The Nintendo Game & Watch, Because Why Not?

New Cyberpunk 2077 Gameplay Is About Being An Outsider,...

Kingfisher to hand back £23m of UK furlough cash

The B&Q owner's profits soar after home improvements boom during the coronavirus...

I Love How Yakuza: Like A Dragon Humanizes Homelessness

The Yakuza franchise has always had a strong track record regarding how it handles...

Peers vote to change the bill dealing with internal markets after claims it would...

Lord Feldman went to meetings between ministers and a biotech firm his PR company...

Fourteen people are held but authorities now believe the dead gunman may have acted...

Brexit: UK 'will be less safe without EU security deal'...

The UK's counter-terrorism head says a deal is "incredibly important" for the country's...

IGN Among Us Celebrity Charity Stream Happening This Thursday!

Join us for a night of space adventures, deceit, and suspicious actions on Thursday,...

Content moderators say the tech giant is "risking lives" for profit in the pandemic.

Mukbang: Why is China clamping down on eating influencers?

The Chinese government is waging war on the eating influencers.

Among Us Teases New Map With Boat Theme

Among Us has teased an image for its upcoming new boat-themed map that will debut...